Wildside BBQ & Grille feels more like a sports bar than a BBQ joint inside with TVs everywhere you look. But the BBQ I had was pretty tasty, so don't judge a book by its cover. Although anyone looking for good Q knows better than that.

I broke with first-time visit tradition and did not get a pulled pork sandwich. I went with the brisket plate instead.

I got BBQ beans and mac-n-cheese for my two sides. Don't usually do mac, but did tonight. Must be the humidity getting to me already (just flew in tonight).

I am sorry to say the meat was barely warm on my plate. I kept the sides (which were hot) and once I was able to find someone that would look up so I could catch their eye, I sent it back.

I am glad I did. Very tender and very tasty. I was disappointed when I added sauce - to me this meat is best as it comes (assuming it is hot...), don't kill the taste with extra sauce.

For my taste the beans were too sweet. Some had a bit too much tooth to them and could use a longer soak.

Not generally a big mac-n-cheese fan (other than my wife's of course!!), but I enjoyed this dish quite a bit.

We visited on a Monday evening - rainy too. Not that busy. If you visit on such a night sit front and center so you can get service if/when you want it.

I would come back here.
Lots of options on the menu too. 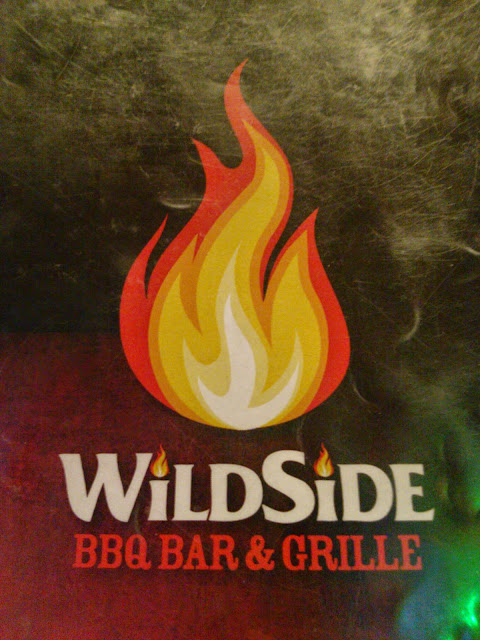 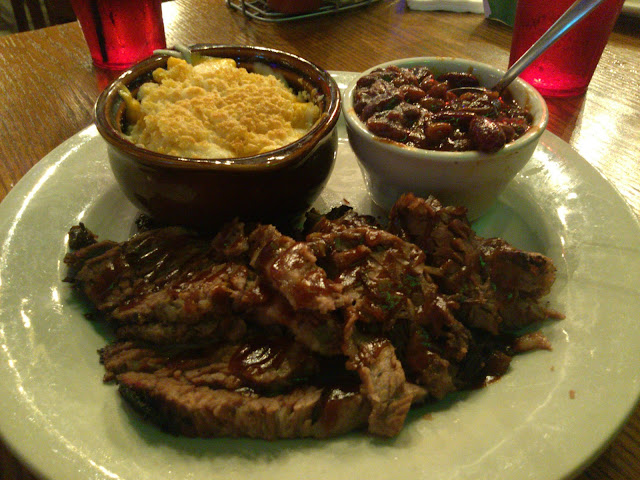 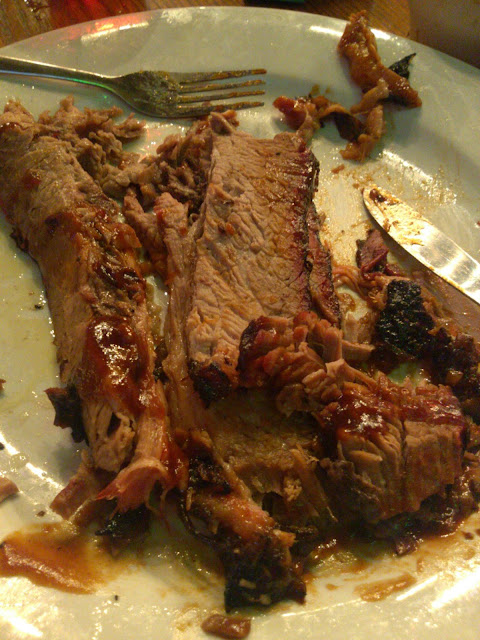 Tonight found me in Fairfield, CA. After a trying day with a critical computer failure I wandered into Best Buy to by a thumb drive in the hope that my computer awakes long enough for me to pull a bunch of data off the local drive. Curses for not backing up regularly and/or saving critical files to the cloud.

What does this have to do with BBQ? Well, I asked the guys at Best Buy for a BBQ recommendation. They both said to go to Kinder's. Bonus points for it being really close to my hotel.

Cut it close by getting there at 7:45 - they close at 8. They didn't have any issue with me ordering that close to closing and eating there.

Got the pulled pork of course. Their standard sando comes with mayo on the top bun. Never had that, but rolled with it. Added coleslaw and baked beans. Plus a beer and it only set me back $14.34.

Not my favorite coleslaw - but I am really picky - still ate most of it. Enjoyed it added to the sandwich. Beans were good and hearty.

They pork was tender and had a nice flavor. The Kinder sauce added a nice touch of flavor without overpowering he meat.

I would come here again for sure. Who knows, maybe I'll head back tomorrow to try the BBQ Beef sandwich.

They actually have three locations - Fairfield, Danville and Pleasanton. 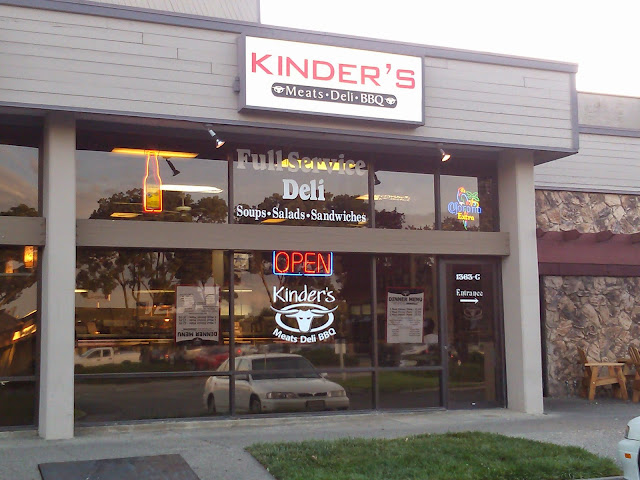 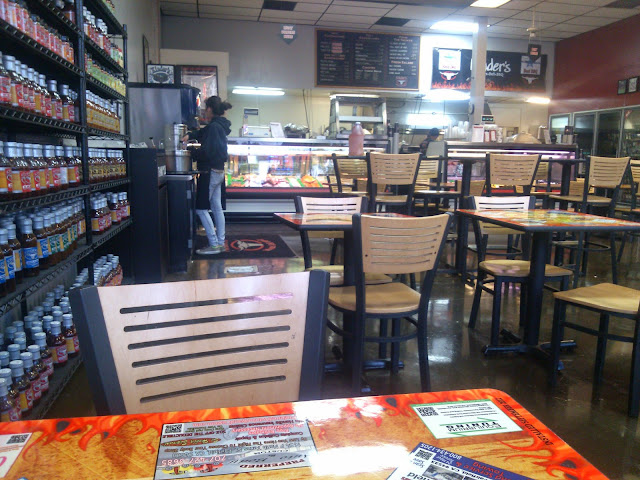 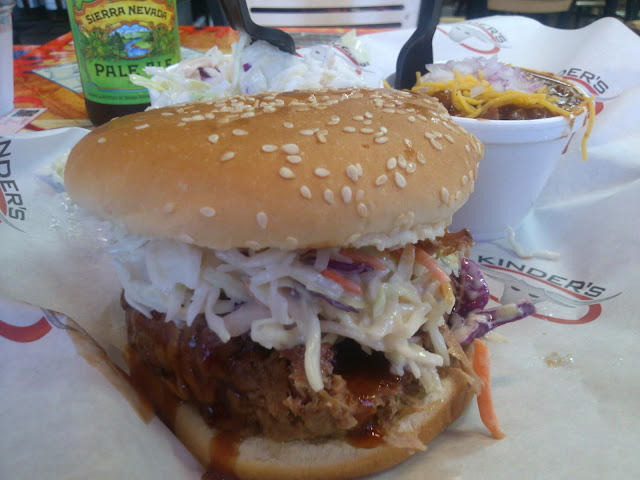 Tonight I find myself in Lodi, CA on a business trip. Whenever I find myself overnight somewhere I seek out BBQ. Here I was only able to locate two locations, and one closed at 4 pm so that was out.

So I heard from a few people that Dickey's is the place to go for BBQ. I didn't think much about the name at the time. When I pulled up I recognized it as a chain because there is one about to open in San Marcos near us.

Truth be told I was disappointed because I really like to find those classic, single-location joints that do some catering on the weekends. But I was ready for BBQ so in I went.

I grabbed a menu and got in line. My go-to item for the first time at a location is the pulled pork sandwich. But I didn't see one on the menu. Well, turns out the "Big barbecue" is a sandwich with your choice of meats (not that you'd know that from the menu).

So I got that with pulled pork (which he pulled right there) with the Dickey's BBQ sauce. They also have a sweet sauce and a spicy sauce. And I got two sides - coleslaw to add to the sandwich and barbecue beans. Add a bottle of Coors Light and the total came to $14.26.

Well, short review - I am looking forward to stopping by the San Marcos location and eating at Dickey's again.

I don't care for most coleslaw. I like theirs. I might like it more with a few raisins and a few chopped nuts, but good just as it is. Just a little sweet.

Enjoyed the beans too. Lots of other sides to investigate during future visits.

The pork was nice and tender. Sauce has just a little spice. Good flavor. I did enjoy the sandwich more with the coleslaw on it.

If you ever find yourself in Lodi and wondering what to do for lunch or dinner, swing into Dickey's at 1379 S. Lower Sacramento in the Lowe's shopping center. 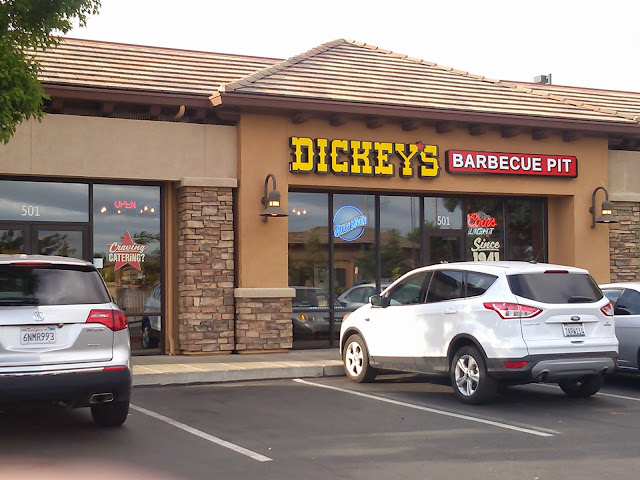 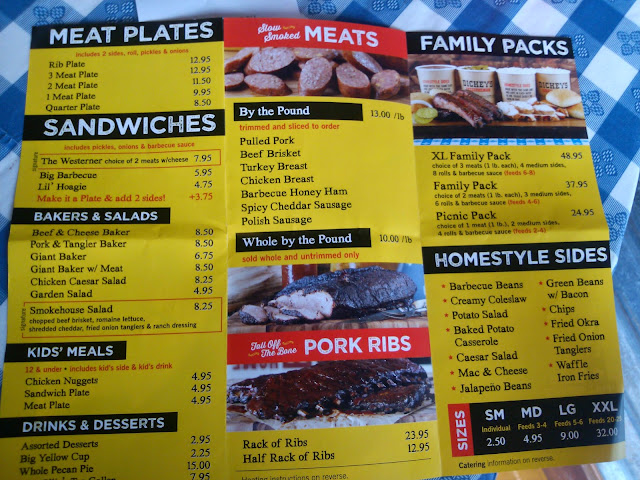 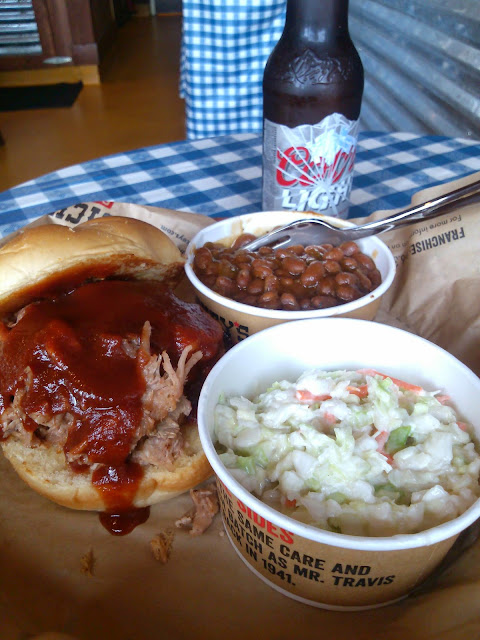 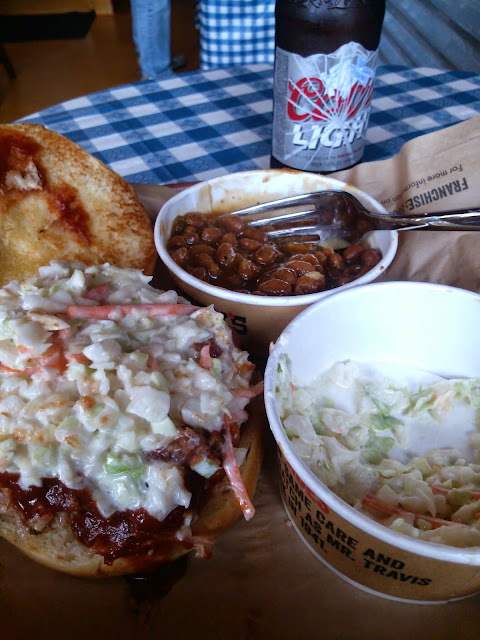 We have almost always enjoyed our visits to Famous Dave's BBQ in Vista, CA. Tonight was no exception.

My brother-in-law Eric is in town and staying with us for a few days. After a day working in the yard we were treated to dinner out with mom and dad. We had all been to Dave's before, but it was Eric's first time. So we decided to go for it!

Wow. That is a lot of food! 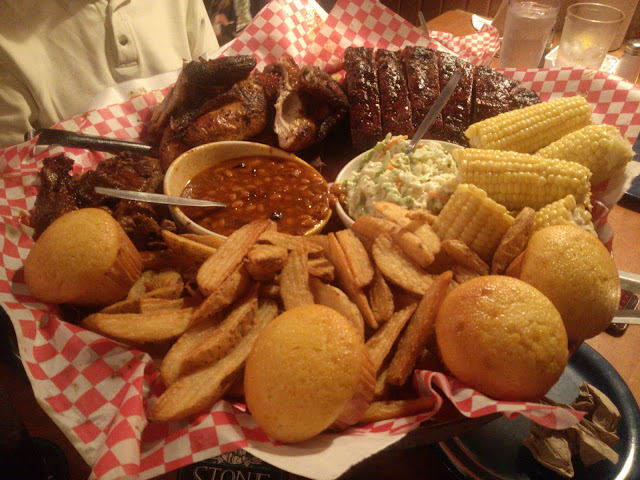 Mom had her usual pulled pork plate (we did the brisket on the trashcan lid, oh ya, it is served on a trashcan lid!) - so that left four of us to work on a meal that can feed six or more. We did OK, but we still left with three takeout boxes!

You have to give it to Dave's, they have a wide selection to pick from, and it is consistantly good. We never hesitate to go there because of worries about the food.

If you haven't been to a Famous Dave's BBQ, I recommend you get to one and see what you have been missing! 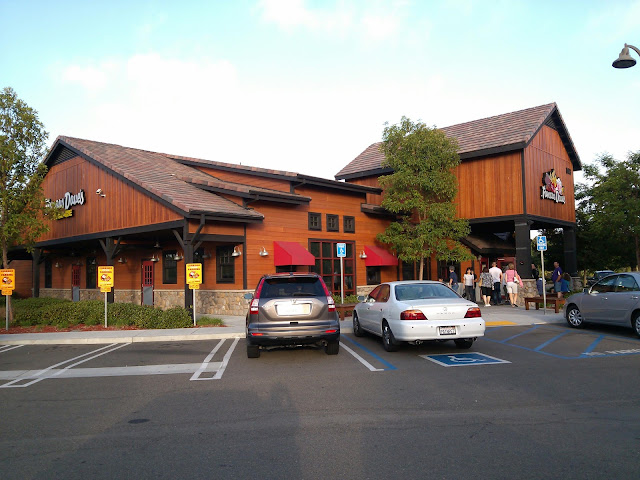 I have been a very bad blogger (on more blogs that just this one I am sorry to say).

So I thought it was high time I dug up all those photos and did what I should have done some time ago - get those reviews posted. Many of these barbeque restaurants I have been back to one or more times. Which is actually good!

One, it means it was good enough to go back, and two, it means I have more than just one trip to base my thought and feelings on.

I am, however, having trouble locating all of my photos. Bummer. Or...is that a good thing since I will just have to "force" myself to go back and eat more que...

What a Lovely Trip to Costco

Post Christmas trip to Costco to ready for our annual New Years Day open house was a boon for my scotch collection. We had a little left over gift money and Jen wanted to be sure I got a few of the bottles that they aren't going to restock.

The Blue Label - yeah, that was on sale so it came home too! 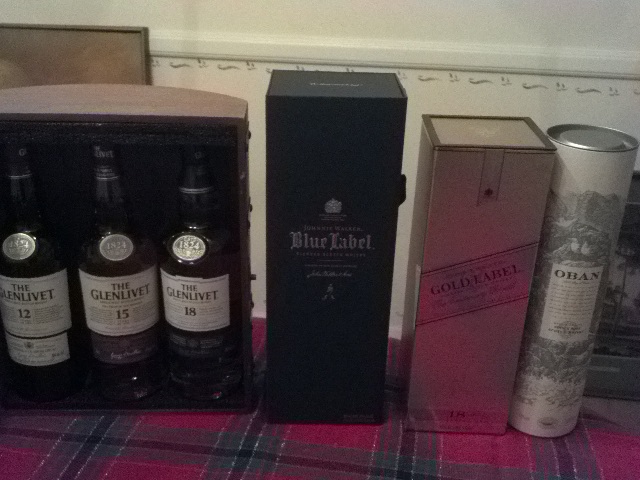 Email ThisBlogThis!Share to TwitterShare to FacebookShare to Pinterest
Labels: scotch

Just in case you might be wondering... here is the current scotch selection at my place. 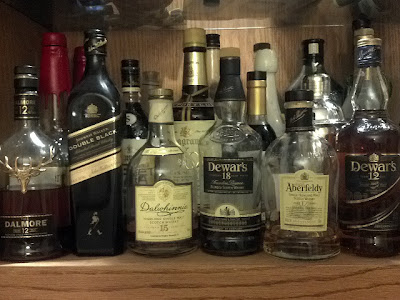 Tonight I am drinking some Dalmore (love the bottle).

My favorite here? I'd say the Dalwhinnie. Tasty, easy to drink, with a slight sweetness.

Down below are also a bottle of JW Black and Dewar's white label.

And hiding in my office is a big bottle of JW Blue that has yet to be opened. Waiting for a special occasion for that one.

The three Dewar's on the right are from Christmas 2012 - Costco package. After the holidays the price kept going down and down on the 3-pack. By the end I had the one Jen bought me for X-Mas, and then three more after the price dropped! So they are all hiding in a closet and as a bottle is finished it magically gets replaced with a full version (gotta love that)!

Oh ya, and had a lovely grilled ribeye for dinner (this is a BBQ blog after all).

Not only have I been bad about posts to my blogs, I have also failed to update my BBQ Joint Reviews map. You can also view on your iOS or Android device.

I will have to make some time for some reviews, photos and meal reports!

Let me know about any locations I should add to the map & review!

Dusting off the Smoker for July 4th

Can you guess what I am doing on July 4th?

Like a ton of folks, I will be firing up the smoker tomorrow and slow cooking some pork butts.

I am trying a new flavor base this time. For years I have used molasses as my base, but from the start I have wanted to use honey. So in honor of the birthday of America I am trying honey.

Sticking with my old standby rub, Bad Byron's Butt Rub. Best to just mess with one thing at a time. I love Bad Byron's tagline - "A little Butt Rub makes everything better" - ain't that the truth!  =)

I picked up 14.84 pounds of Butt at Restaurant Depot in San Diego on Monday. It was hard to not get more Butt and toss in some Ribeye (on sale!) as well. But I was good. Lots of other supplies yet to get for the party on the 7th.

I trimmed up the two butts a bit. There was some serious fat on the larger of the two. Coated with honey. rubbed with Butt Rub, wrapped and back into the refrigerator.

On the 7th we are having family and friends over to hang out, eat, drink and spend some quality time together. Serving pulled pork sandwiches and hotdogs. If people know what's good for them we will have a lot of leftover hotdogs...

Well, now that I have that done, I'd better finish cleaning up the kitchen and get to bed.
After the butts are done tomorrow we are heading out for a date - San Diego County Fair or dinner and a movie. We shall see...
Posted by @SDBBQ at Tuesday, July 03, 2012 No comments:

Impulse buy at Costco.
Been thinking about trying this for some time. Imagine my (happy) surprise when Jen walked over and put it in the cart!

Will let you know what I think! 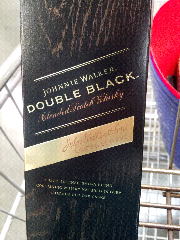